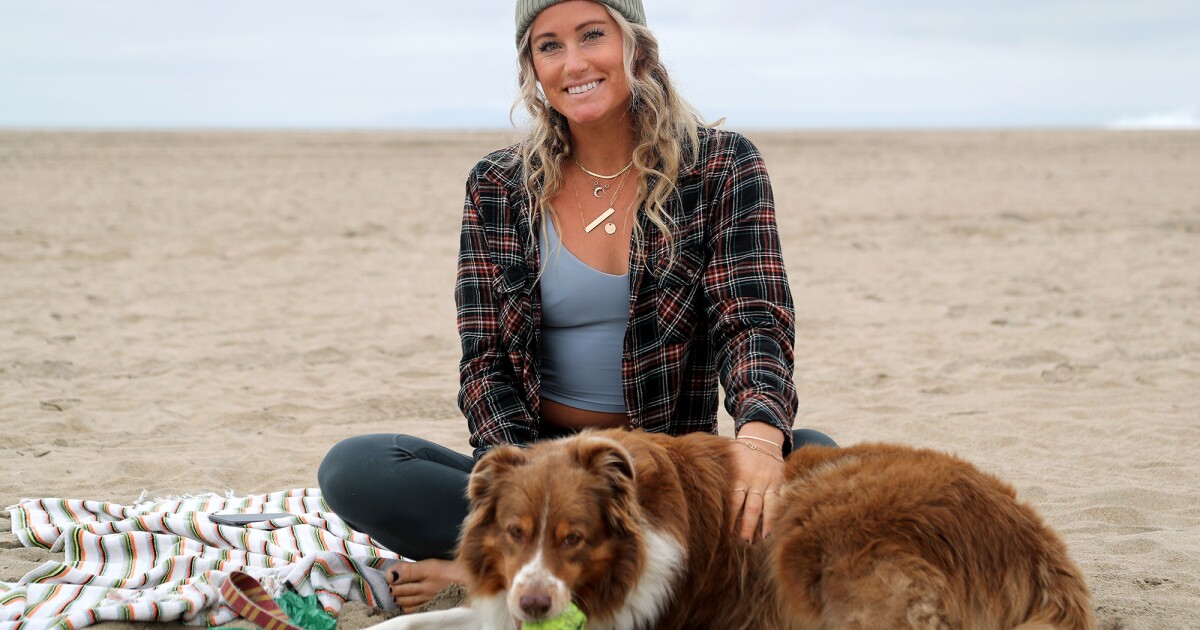 She had heard about the show from an agent of a friend of hers. Casting agents wanted to find a girl who loves the outdoors, adventure and competition. They wanted someone with a unique and strong bond with their dog, she recalled in a recent interview. She and Gryffin, her Australian Shepherd, are tied at the hip.

She took Gryffin – which is short for Gryffindor – everywhere.

“Gryffin is my best friend,” Lowe said. “I take it everywhere with me. I’m a yoga teacher here in Orange County, so I bring her to my yoga classes. She’s my plus-one at all family gatherings. She’s my adventure buddy and she’s always there for me when I come home after a long day. She is always by my side.

So she went to Los Angeles to do the first interviews. It happened very quickly. Almost out of the blue, Lowe said.

“I had no idea this show was going to be as big as it ended up being,” Lowe said. “But if I had to think of the perfect type of show for me and my dog, it’s a dream come true.”

Newport Beach residents Lowe and Gryffin are one of 12 teams competing in Amazon’s new show, “The Pack,” which will be available to stream Friday on Amazon Prime Video.

Hosted by gold medal-winning skier Lindsey Vonn and her dog Lucy, “The Pack” takes teams around the world to compete in challenges for a $500,000 prize. The winning team will also win an additional $250,000 for an animal charity of their choice.

Lowe said she was intrigued by the series because she loves to travel, but what she missed most about traveling was Gryffin. She said it was a “no brainer” to join if she was cast. Lowe, who grew up in Yorba Linda, said she was competitive in nature and played volleyball at UC Santa Barbara, where she went to college.

Some time later, she had Gryffin.

Lowe said she adopted Gryffin about seven years ago after returning from a road trip with a close friend. She said she had wanted a dog for a while when Gryffin searched online.

“Gryffin was kind of on her way home, so we just pulled over and I took out the money and took her home at seven weeks. It was kind of meant to be,” Lowe said. “It was kind of a spur of the moment.”

Lowe said the best part of being on “The Pack” was when Gryffin first saw the snow. She said the best experience was just traveling the world with her dog. While she couldn’t say how far she went at the risk of spoiling the show, Lowe said she felt like “The Pack” pushed them out of their comfort zone.

“I think it brought us even closer than before,” Lowe said.

The biggest challenge was calming Gryffin when she was excited. Lowe said it was difficult trying to calm her down so Lowe could focus on tasks as well, but said Gryffin’s energy sometimes worked both for and against their favor.

Filming for the show wrapped last year and Lowe is back in Newport Beach now with Gryffin, where Lowe teaches beach and indoor yoga classes with his little “co-teacher” at its ratings.

Looking ahead, Lowe said her goal is to open a yoga center or wellness retreat and bring her dog to work as often as possible. She wants to develop her business and continue to travel.

“With COVID though, I’ll probably end up taking a van and taking my dog ​​on a trip across the United States,” she said.

Support our coverage by becoming a digital subscriber.

2020-11-18
Previous Post: Benefits and how to do it right
Next Post: 12 yoga poses you can do anywhere – Cleveland Clinic